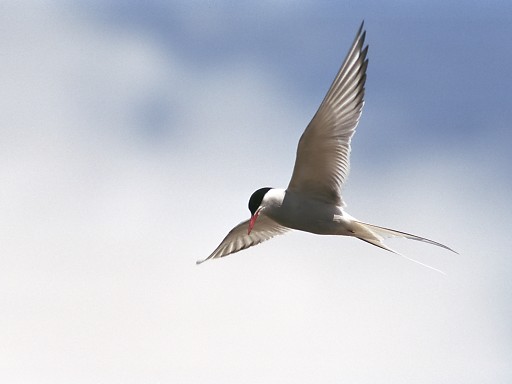 The stars on the beautiful holm Hallig Gröde in the German National Park Wattenmeer (North Sea) are the birds. So this picture of an arctic tern is somehow the natural start for a series from our vacation in May 2003.

Going on vacation with a small child in Germany almost automatically ;-) means the North Sea coast. And that’s where we went with our daughter Jenny. More precisely we went to North Friesland, starting with the Eiderstedt peninsula, in 2001 to St. Peter-Ording (which we didn’t like that much, too expensive, too many tourists) and then in 2002 to Westhever (very beautiful, scenic lighthouse, alas renting the same appartment for 2003 didn’t work, and all the really nice houses near the dike are under Hamburgian control). In May 2003 we were more adventurous and took an accomodation for 2 weeks on a holm … (to be continued)