The total solar eclipse of 09 Mar 2016 on Belitung, Indonesia under difficult conditions, as close as it gets to clouded out.

Due to our location relatively near to the beginning of the eclipse path, the duration was only 02m05s (lunar limb corrected), compared to 04m09s at greatest eclipse.

Fleecy clouds and haze obscured the view, but the inner corona, a large prominence at 9h and the chromosphere at 2nd and 3rd contact were clearly visible in the camera viewfinder and with binoculars. Visually, to the naked eye, this eclipse wasn’t as impressive as others with a clear sky, but I really liked the “light off” / “light on” effect behind the clouds.

Part of our tour group lead by Dan Fischer decided to hunt for (more) clear skies and drove further south to the Belitung Timur stadium near Manggar.

The time-lapse video shows the drama, at least we had picturesque cloud movements. ;-)

Beside our tour group and some other eclipse chasers from Europe, there were also many locals on the beach. I really liked the friendliness of the Indonesians. 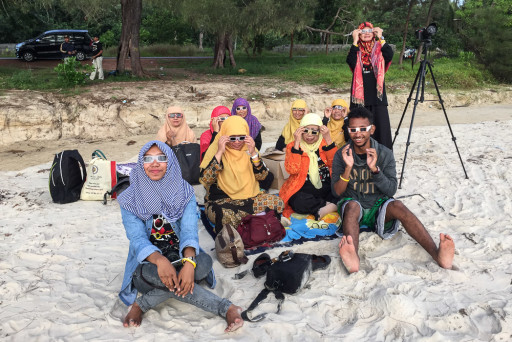 To them we were as much as an attraction as the total solar eclipse, so taking pictures with us and our equipment after the eclipse was in demand. All in all, we very much enjoyed the experience.

Much giggage still to wade thru, photos and videos. Stay tuned. ;-)